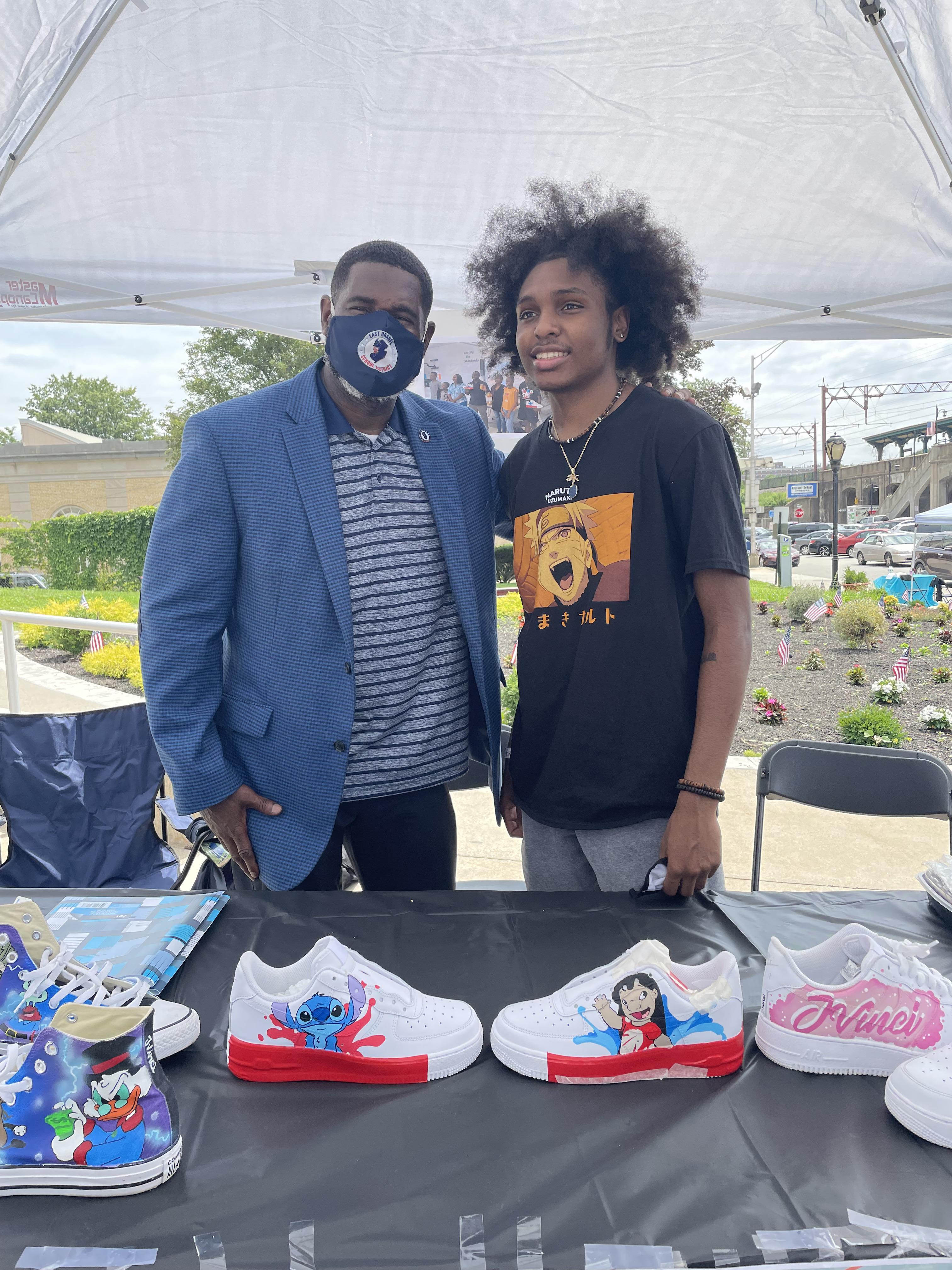 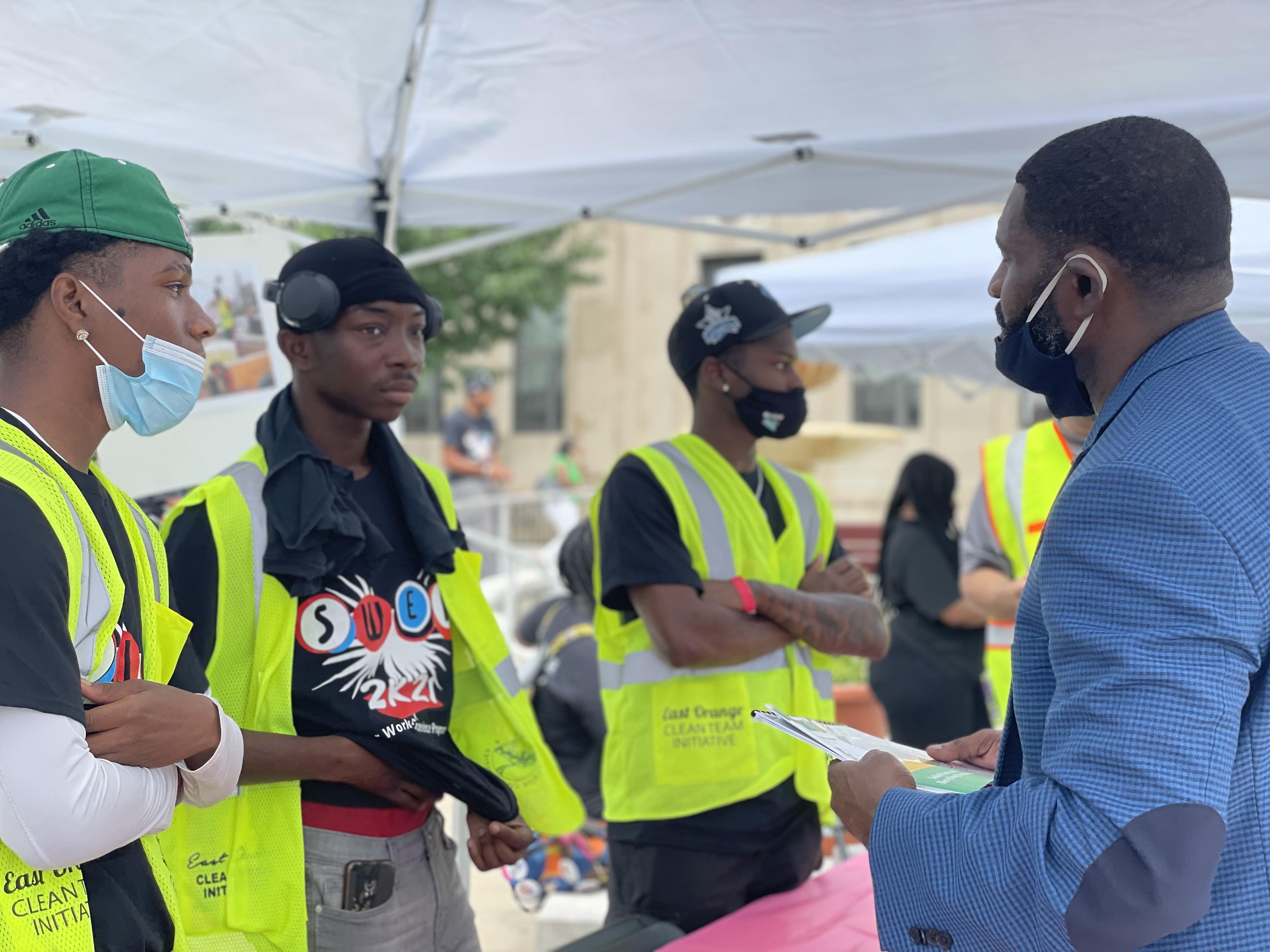 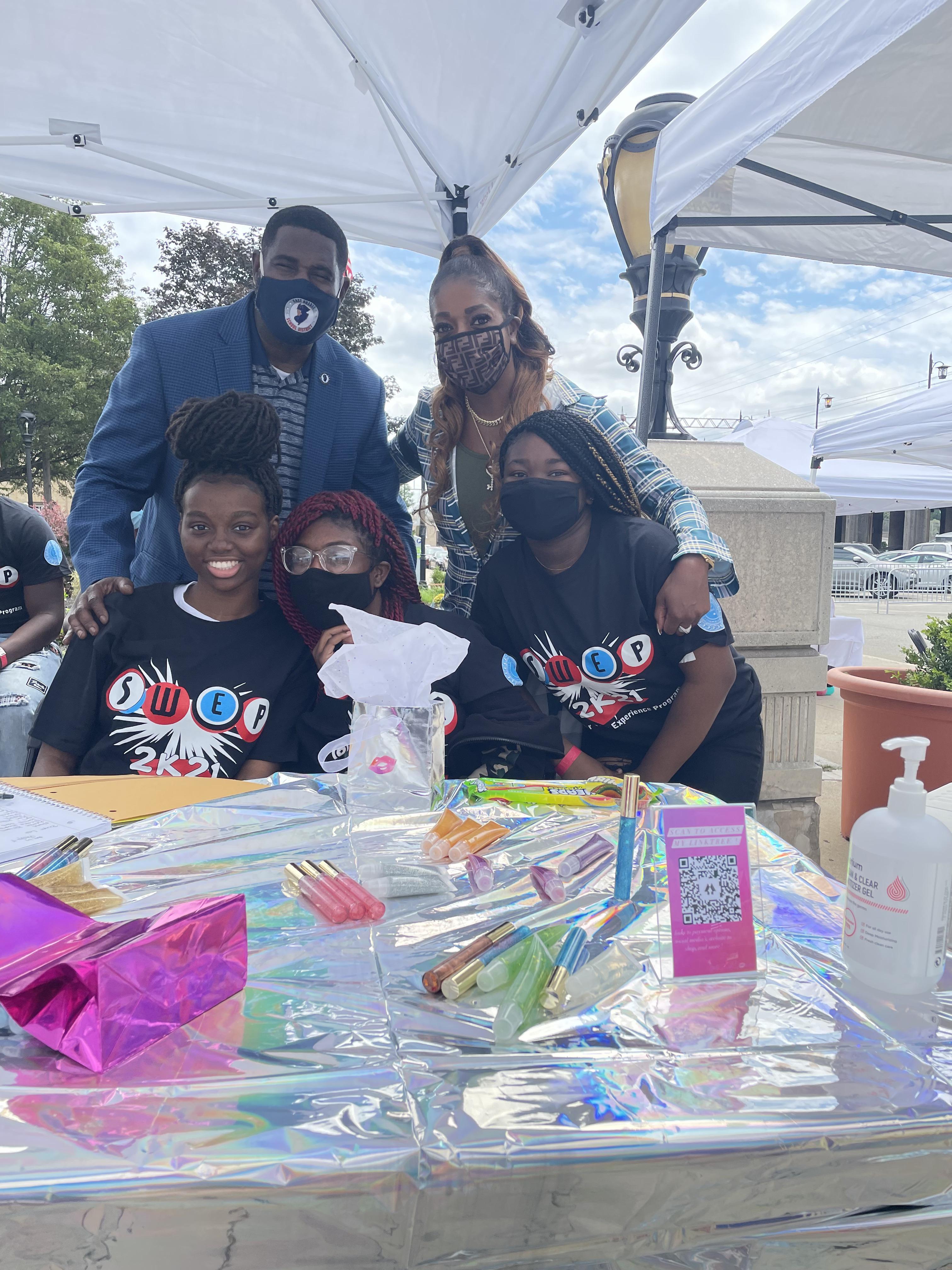 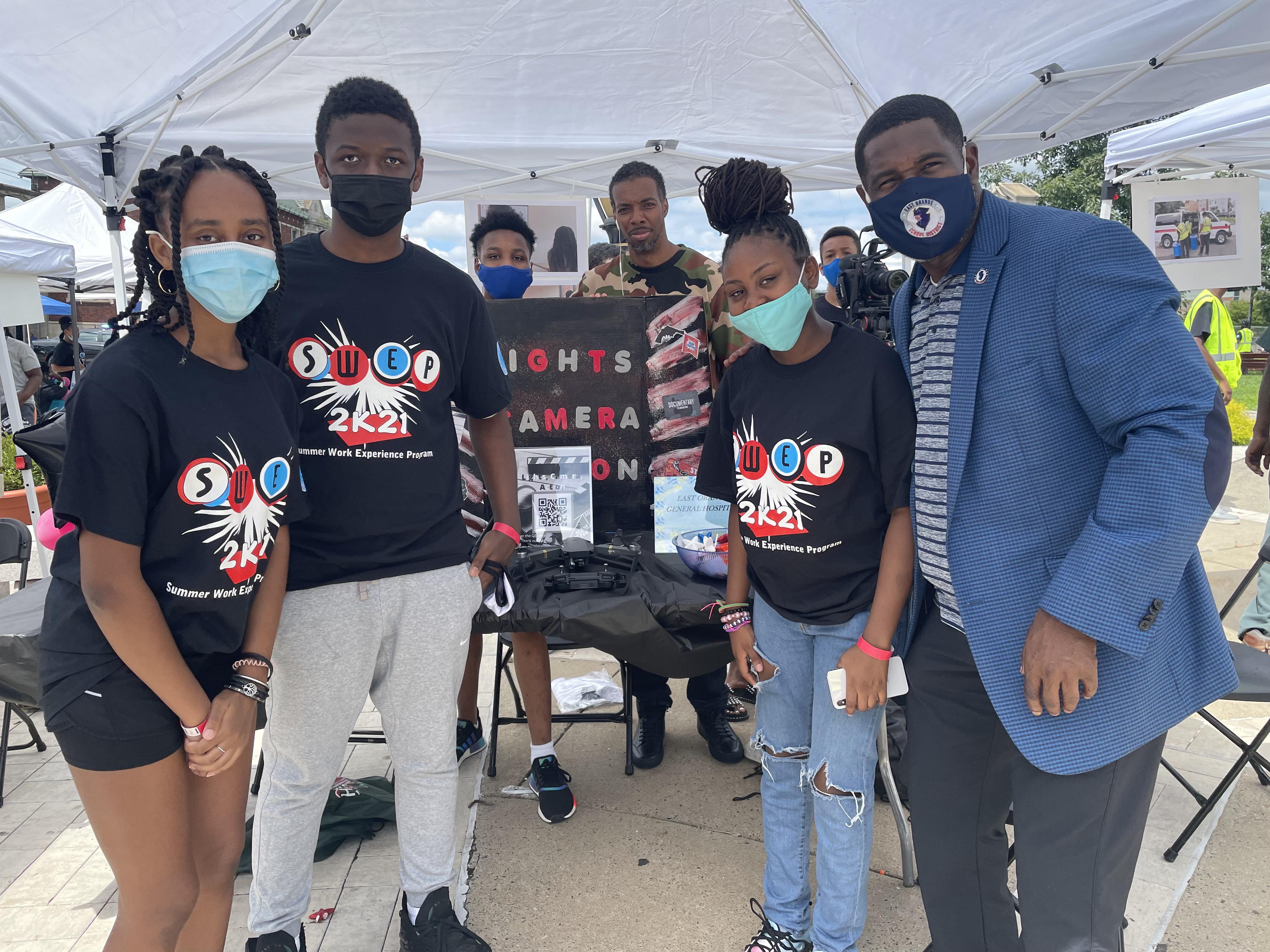 East Orange Summer Program Finishes Second Year, Teaches High School Students to Be Entrepreneurs,
Mental Health Peer Coaches and Produce Short Documentary on Impact of Gun Violence
Designed to help bridge the learning gap and offset lost ground in social and emotional learning due to the coronavirus pandemic, approximately 300 junior high and high school students in East Orange, New Jersey were once again offered an opportunity to “earn while they learn” this summer.

The Summer Work Experience Program (SWEP) is part of East Orange Mayor Ted Green’s “Stands Strong Against COVID” program that began in 2020 and was endorsed by both his administration and the East Orange City Council. Focused on entrepreneurship, civic engagement, and mental health, the program completed its second year with a close-out presentation and ceremony at City Hall Plaza dubbed “SWEP-Fest.”

At the presentation, students displayed their capstone projects, many of which were centered on businesses created during the summer program. In addition to individualized career-based projects, students participated in a group project centered on social justice, civic engagement, and community leadership.

Last year’s project was a student-led peaceful protest demanding justice and the release of an unedited video in the case of Maurice Gordon, an unarmed black man who was killed by a New Jersey State Police officer on the Garden State Parkway. The protest was featured in media outlets throughout the United States and the world.

This year’s culminating project was the production of a short documentary about gun violence produced with the help of award-winning broadcast journalist and filmmaker Samson Styles. “Beyond the Barrel: An East Orange Story” looks into the impact gun violence has had on these children and their communities and their hope to move beyond it. The film notes that although many cities across the United States have experienced upticks in violent crime over the course of the pandemic, East Orange has not.

“Gun violence is unacceptable,” said Mayor Green. “The senseless killing has got to stop and East Orange stands firmly behind these young men and women in their efforts to build for themselves and their community a better, brighter, and gun-free future. I’ve met with these young men and women and I am committed to working with them to make a difference here in East Orange and beyond. The Summer Work Experience Program is about opportunity – and once again this year these students have made the most of it – for not just themselves, but the community at large.”

Styles, who directed and produced the Cinedigm documentary “Killing Beef: Gun Violence in the Black Community,” plans on submitting “Beyond the Barrel” to film festivals across the United States and expects the documentary to be aired nationally.

The program also featured courses in financial literacy, “The Business of Beauty,” “T-Shirt Branding,” “The Business of Media,” “Digital & Drone Photography,” “Culinary Arts” (taught by the local owner of Lite & Soul Eatery), “Grades4Life Youth Entrepreneurship” and a course —  believed to be one of the first of its kind in the nation — that trained and certified high school students as mental health peer coaches in the earn while you learn model.

The Mental Health Peer Coaching Certification component of the summer program was led by Professor Juan Rios, director of the Master of Social Work Program at Seton Hall University, and his assistant, Ashley K. Fullerton, a 2020 graduate of the Seton Hall University M.P.A. program and a member of its Center for Community Research and Engagement.

Students in the course were taught the fundamentals of Social Emotional Learning, how to develop coping skills, how to meditate, meditate and “push past” difficult situations – including the challenging emotional issues brought on or escalated by the pandemic. They were also taught how to teach these skills to their peers.

“Mental health issues are no longer being ignored,” said Justice Williams, a 16-year-old junior in the East Orange STEM Academy High School.” “Most recently, great athletes like Simone Biles and Naomi Osaka have shown us that it’s OK to put our own mental health needs first. And this program helped teach me to do that for myself – and my fellow students.”

Eight students received full certification as Mental Health Peer Coaches and will be employed during the course of the upcoming school year to help their fellow students successfully transition back into “school life” and find the resilience and support they need to get through difficult times.

“This Mental Health Peer Coaching certification for high school students trained for that purpose and paid for their efforts is new,” said Professor Rios. “I wish I could say it was my idea, but it was the students themselves who proposed this program. They said they benefited so greatly from the mental health and resiliency program run by Dr. Jamila T. Davis in the spring that they wanted to make the teachings available to their fellow students. The program is working, and we’ll ultimately publish the research so other school districts can replicate its successes.”

East Orange School District Superintendent AbdulSaleem Hasan began “summer” enrichment programs in the district in the spring to “get a head start” on mitigating the learning losses due to the pandemic. He approved the program after students in the initial mental health and resiliency class approached him in a virtual conference pleading for a continuation of the program – and for more formalized training in the field so they could become Mental Health Peer Coaches. Taken by the overwhelmingly positive response and initiative of the students, Hasan not only approved the program but also invited a number of the students in attendance to become part of his Student Advisory Council for the Superintendent. The Council is currently working on several other student-led initiatives.

“Beyond the core curriculum, we are partnering with our students in designing programming that meets their academic, professional, and social and emotional needs,” said Hasan. “True education is a partnership between the teacher and the taught, and in East Orange, we have embraced that partnership in preparing our students for the future.”

SWEP was delivered to students virtually through the VIP Online Academy, headed by Dr. Davis, author, activist, and entrepreneur. Using credible messengers, celebrities, and accomplished professionals, the VIP Online Academy teaches social, emotional, vocational, and entrepreneurial specific learning as well as social justice and civic engagement. The Social Justice and Civic Engagement component of the program was led by Angelo Pinto, Esq., a founding member and senior strategist for Justice League NYC and Until Freedom, a national civil rights organization dedicated to addressing systemic and racial injustice as well as other forms of socio-economic disparities.

“These students are extraordinary and East Orange is on the cutting edge of preparing its young men and women for life, financial freedom, and, importantly, participatory democracy. Without participation by the people, there really is no democracy, only alienation, and oppression,” said Davis. “But this generation is poised to make a difference – and I’m ready to make it with them.”

Students attended classes four days per week and approximately six hours per day from June 28 to August 5. The learning enrichment program was spearheaded by LaDonna Johns, manager of the Mayor's Office of Employment and Training. The program included approximately 300 students who received earning incentives equaling up to $12 per hour for their participation supported by the nonprofit organization Grades4Life.

“Beyond the Barrel: An East Orange Story” can be seen on YouTube via https://www.youtube.com/watch?v=O4lmdVYxHaE